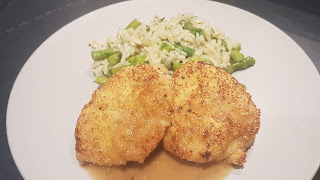 I really wanted to try the Creamy Butternut Squash Polenta from Once Upon a Chef, but no one else was interested, so I used my cornmeal to make a crunchy crust for the chicken breasts I had. I'll have to try the polenta another time.

I also saw the fresh sage in the fridge, and the lemon in the fruit bowl, and decided to use them somewhere. As I went along organizing the breading for the chicken, I thought about using them for a sauce, instead of putting everything into the crust.

Good idea! We opened a bottle of unoaked Chardonnay which worked perfectly in the sauce, and was a nice pairing with the meal.

The last of a bag of orzo, and the remaining asparagus became the side dish for the chicken, along with a bit of olive oil and grated Parmesan.


Cut four boneless, skinless chicken breasts on a slight diagonal into 2 or 3 pieces, and set up for breading...in the first bowl you will need flour, seasoned with salt, pepper and a pinch of cayenne pepper. 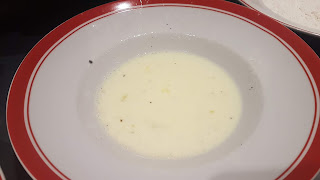 In the second bowl, whisk together: 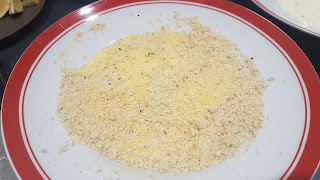 In the third bowl, combine: 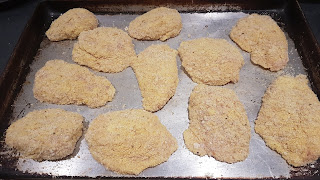 Bread the chicken pieces by dredging them in the flour, shaking off the excess and then dipping them into the egg wash.

Allow the excess to drip off, and then coat the chicken with the cornmeal-breadcrumb mixture.

Place onto a baking sheet and chill if not cooking immediately. 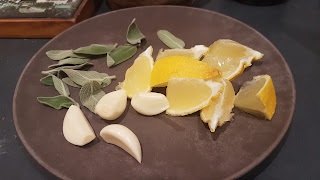 Cut the remaining lemon half into 8 wedges, and set aside along with 10 - 12 fresh sage leaves and 4 cloves of garlic, that have been peeled.

This is for the sauce. 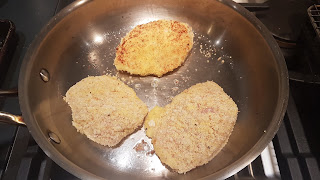 In a smoking hot pan, using olive oil, brown the breaded chicken on both sides.

Remove the browned chicken and place it onto a rack, on a baking sheet and place into a 375F oven to finish cooking.

Reserve the pan for the sauce.

Before starting the sauce, wipe the excess grease and breading that may have fallen off the chicken out of the pan, using paper towel. 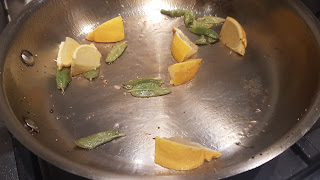 Heat the pan and when it is hot, add the lemon wedges and fresh sage leaves. 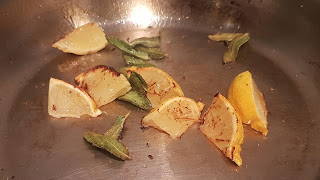 Cook, stirring often, over a medium high heat, until the lemon starts to caramelize.

Stir in the garlic, minced and cook for about 30 seconds, being careful not to burn it. 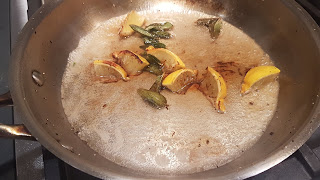 Allow the wine to boil until it reduces by half. 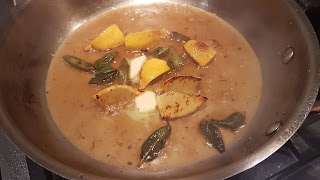 Just before serving, heat the sauce base until simmering, then whisk in:

2 tablespoons cold butter, a small piece at a time 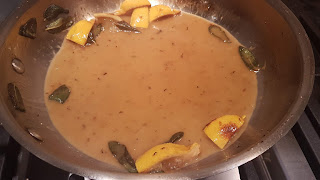 Remove the sauce from the heat as soon as the butter has melted, and the sauce has emulsified.

Taste and season with salt and pepper. I chose to strain out the sage leaves and lemon wedges. 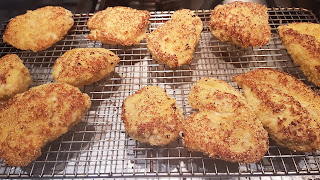 Remove the cooked chicken from the oven.

Rest for 5 minutes before serving.


I served the chicken with orzo and asparagus, tossed with olive oil and Parmesan. Drizzle the sauce over the chicken, or pass it at the table. The chicken is crunchy on the outside, and moist and tender on the inside and the acidity of the sauce balances everything out nicely. 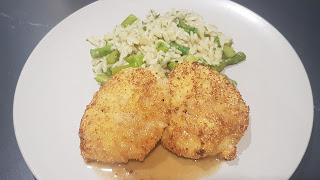